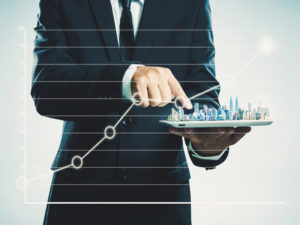 In January, 2018, the Bank of Canada raised its lending rate to 1.25 percent from 1 percent, the highest level since 2009. The decision was based on an economy at near full capacity and recovery in inflation rates. This caused the Canadian dollar to sink, though it wasn’t as bad as it could have been because foreign exchange rates and bond markets had predicted this change and responded accordingly.

The somewhat surprising result has been a slump in household spending. Household spending fell to its slowest pace in two years. Most economists were expecting growth to continue to be a little higher than the non-inflationary speed limit for at least twelve more months.

The Canadian economy grew at a strong pace for the first half of 2017. The overall performance for 2017 was 3% because of annualized growth of four percent or better for the first half of the year. The economy then grew more modestly, hitting an annualized 1.7% in the fourth quarter, a little below the 2% forecasted. The chief economist at BMO Capital Markets, Doug Porter, says that the economy is getting back to a growth path of around 2%, steady and stable growth.

Business investment hit an annualized rate of 9.5% in the fourth quarter of 2017 because of both investment in new housing construction and capital investments like transportation equipment. They’ve slowed down the rate at which they’re adding to inventories, potentially weighing on long-term growth.

Canada’s economy was boosted in part by an uptick in housing sales in advance of tighter mortgage regulations. The slowdown in the housing market was intentional and planned to cool off severely overheated markets like Toronto and Vancouver. Markets like Calgary weren’t overheated and have recovered from the energy sector slump, so there’s a good supply of homes and relatively steady home. Talk to a Grande Prairie Mortgage Broker about getting pre-approved for a mortgage before rate hikes expected by this summer.

Statistics Canada reported that it expects the Bank of Canada to remain in a holding pattern on interest rates at the next policy meeting. They’re waiting to ensure that the moderate growth rate of 2% to 2.5% is maintained. However, the bank is probably going to raise interest rates later in the year. The market now gives the odds of a rate increase in May as 72% while nearly certain that there will be a rate hike in July.